Animating Democracy’s books examine the role of artists and cultural institutions as catalysts, conveners, and initiators of civic dialogue and engagement efforts around important civic issues. They highlight best practices and outcomes from projects implemented by 36 cultural organizations that participated in Animating Democracy from 2000 to 2004, as well as challenges and complexities in this work.  The series offers valuable insight gleaned from the work and voices of pioneering artists, innovative cultural leaders, and committed civic partners.

Click on the book title or go to the Americans for the Arts Online Bookstore to order any of these publications. Orders can also be made by emailing bookstore@artsusa.org. 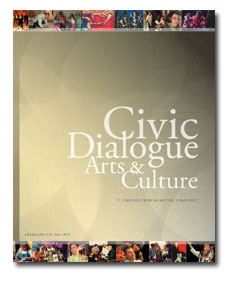 Civic Dialogue, Arts & Culture explores the power of the arts and humanities to foster civic engagement while advancing possibilities for arts and humanities organizations to be vital civic as well as cultural institutions. From 2000 to 2004, Americans for the Arts, with support from the Ford Foundation, implemented Animating Democracy, an initiative to foster artistic activities encouraging civic dialogue on important contemporary issues. This book examines the experiences of 37 arts and humanities projects, realized by a wide range of cultural organizations. These projects explored such issues as race relations, economic inequity, gentrification, school violence, the role of same-sex couples in society, and the influx of immigrants and refugees in communities, among others. Civic Dialogue, Arts & Culture contributes to deepening understanding of the artistic, civic, and organizational dimensions of the work; dialogue approaches; common challenges; as well as the principles, theory, and practices that underpin effective work.
2005 / 312pp. paperback / photographs / $25.00 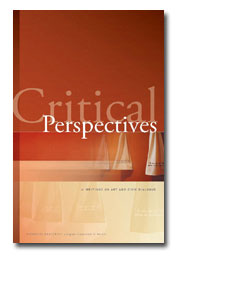 Critical Perspectives: Writings on Art and Civic Dialogue is a collection of essays that explore art, civic dialogue, and reflective critical writing. Twelve essays focus on three compelling and very different projects supported by Animating Democracy that employed the unique capacities of theater, visual art, and historic preservation to stimulate people to talk together in new ways about issues that matter in their communities: Dell’Arte theater’s Dentalium Project, about the impact of a Native American casino on the small town of Blue Lake, CA; MACLA’s Ties That Bind, about intermarriage between Asian and Latino Americans in Silicon Valley, CA; and The Slave Galleries Restoration Project, a collaborative project of St. Augustine’s Episcopal Church and the Lower East Side Tenement Museum, about issues of marginalization on the Lower East Side. Critical Perspectives deepens understanding of arts-based civic dialogue work through the engagement of multiple writers—arts writers, a journalist, community participants, anthropologists, a sociologist, a storyteller, historians, and project directors—as they approach each project from their unique vantage points. In so doing, Critical Perspectives expands who has voice and authority in critical writing about civically engaged art. The collection is introduced with an essay by noted cultural writer Lucy Lippard.
2005 / 176pp. paperback / $13.00 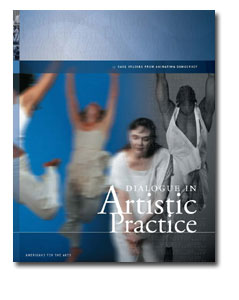 Dialogue in Artistic Practice explores the work of three exemplary artist companies. Case studies examine the Animating Democracy projects implemented by these companies, as well as their long traditions of community engagement, to highlight how dialogue is inherently a part of their artistic practice. Through a form that alternates dance performance and dialogue, Urban Bush Women’s Hair Parties Project taps personal experiences to generate dialogue about the politics of hair within the African-American community and to examine deeper issues of race, class, and social justice. Cornerstone Theater Company’s Faith-Based Theater Cycle explores how faith unites and divides American society. This case study examines Cornerstone’s dialogic approach to developing plays; discusses Zones, a play in which audience dialogue is integral to the plot and action; and describes the new approaches it developed in collaboration with its partner, The National Conference for Community and Justice. The Liz Lerman Dance Exchange analyzes its artistic concepts and practices in relation to qualities of effective dialogue—excavating the tools, principles, and “dialogue moments” in their work, using the Hallelujah project as a key point of reference.
2005 / 96pp. paperback / photographs / $13.00 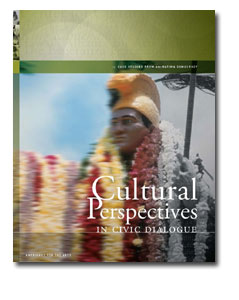 Cultural Perspectives in Civic Dialogue shares the efforts of cultural organizers who are skilled in working deeply within and across cultures to understand important cultural considerations in arts-based civic dialogue work. Their endeavors illuminate how cultural norms mediate public space and participation, as well as how the choices regarding art forms and dialogue approaches can support or discourage civic participation of various cultural groups. In the King Kamehameha I Statue Conservation Project, rural Hawai’ian residents deliberated how best to conserve a statue of King Kamehameha I and, in the process, deepened understanding of the links between cultural identity, heritage preservation, and current issues of land and economic development. The Center for Cultural Exchange’s African in Maine program supported Sudanese, Congolese, and Somali immigrant and refugee communities in their own cultural programming interests to reveal the diversity and conflicts within and across divided African communities, as well as between Africans and the wider community of “Mainers.” The Esperanza Peace and Justice Center’s ongoing Arte es Vida program addresses issues of cultural equity and democracy related to San Antonio’s Chicano and Mexicano communities. It acts on the idea of cultural grounding - the concept that, in the context of a culturally dominant society, a strong sense of selfhood and identity rooted in cultural practice is necessary to empower marginalized communities toward active participation in public dialogue.
2006 / 106pp. paperback / photographs / $13.00 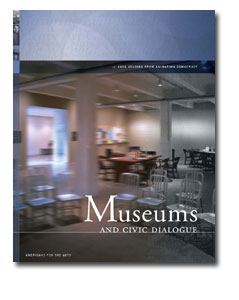 Museums and Civic Dialogue features exhibition projects that demonstrate how three museums have functioned as provocative and effective forums for civic dialogue. Focusing on contemporary and conceptual works of art as well as historic images, the projects highlight new and adapted approaches to curatorial practice, interpretation, and education prompted by civic intention. The case studies also offer insights regarding institutional challenges and changes in practice that necessarily occurred. Through Gene(sis): Contemporary Art Explores Human Genomics, Henry Art Gallery employed the power of art to provoke dialogue about new developments in the science of human genomics. The Jewish Museum’s Mirroring Evil: Nazi Imagery/Recent Art exhibition featured images incorporating Nazi perpetrators as a springboard for dialogue about complicity and complacency toward evil in today’s society. The Andy Warhol Museum’s Without Sanctuary Project engaged regional audiences in dialogue about race and bigotry through an extensive project centered around 19th and 20th century photos and postcards illustrating lynching in the United States.
2005 / 88pp. paperback / photographs / $13.00 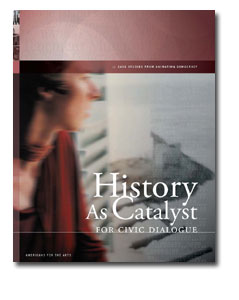 History as Catalyst for Civic Dialogue offers an inside look at three compelling projects that mined hidden, forgotten, or suppressed histories of slavery and lynching in the United States in order to stimulate meaningful dialogue about persistent issues of race and marginalization. The Slave Galleries Restoration Project at St. Augustine’s Episcopal Church (implemented with the Lower East Side Tenement Museum) engaged neighborhood residents in dialogue about issues of marginalization in Manhattan’s Lower East Side by tapping the power of the church’s hidden rooms, once used to segregate African Americans from the rest of the church. Traces of the Trade, a documentary film by Katrina Browne with dialogues about white privilege, shifts attention to the lesser-known history of the North’s role in the slave trade, as explored through stories of both the filmmaker’s slave-trading ancestors and her present-day descendents as they reckon with their history. The Andy Warhol Museum’s Without Sanctuary Project engaged regional audiences in dialogue about race and bigotry through an extensive project centered around 19th and 20th century photos and postcards illustrating lynching in the United States.
2005 / 102pp. paperback / photographs / $13.00 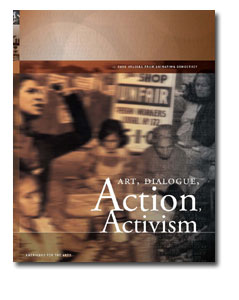 Art, Dialogue, Action, Activism examines the role of dialogue in the work of cultural organizations oriented toward civic action and activism. Four very different activist endeavors offer insights into dialogue that is integrated within cultural activity as a means of educating and organizing, dialogue as a means to explore different perspectives among people who hold a common goal or position, and dialogue as a necessary precursor to decision-making or action. Through a long-term residency by Sojourn Theatre, the Council for the Arts of Greater Lima’s (Ohio) Allen County Common Threads Theater Project moved a community toward action on long-standing issues of race and trust among city and county leaders. The Los Angeles Poverty Department’s Agents & Assets play and residency investigating the advent of the U.S. crack epidemic was mounted in Detroit to influence an election deciding drug policy related to nonviolent drug offenders. Through The Esperanza Peace and Justice Center’s ongoing Arte es Vida program, cultural activity is a forum for plática, or dialogue, and serves to raise consciousness, recover history, inform people of current issues, and mobilize community members toward action. The Understanding Neighbors project spearheaded by Out North Contemporary Art Center sought to change the contentious tenor of debate about rights of same-sex couples in Anchorage, AK.
2005 / 114pp. paperback / photographs / $13.00 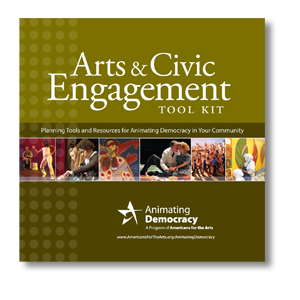