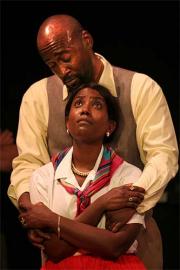 One Day was part of a year-long collaboration between Sojourn Theatre Company and visionPDX, a public engagement initiative sponsored by the Office of the Mayor of Portland that invited community members to develop a shared vision for the future of the city. The play was part multi-narrative performance, part civic dialogue. It told the story of eight fictional Portlanders (composites based on themes drawn from civic engagement research conducted by Sojourn and visionPDX) and the choices they had to make within a 24-hour-period in the city. Then, the play invited audience members to talk with the characters about their decisions. The show explored the present reality of Portland and the issues that challenge citizens in attaining the future they seek. It was based on the results of surveys conducted by visionPDX, as well as research conducted by Sojourn in the form of creative public forums that invited Portland residents to discuss their visions for the city’s future. Intended to represent typical Portland residents, the play’s characters varied from a small-business owner to a young Ukrainian immigrant, and expressed concerns that raised questions about real issues ranging from the environment to healthcare costs to gentrification and housing costs. The play invited audience members to talk with the characters about the decisions they made in addressing their circumstances and concerns. It toured diverse neighborhoods all over the city, and the post-show community dialogues were attended by representatives of the Mayor's staff, transcribed, and immediately brought into City planning meetings at the Mayor's office.