The Heart of Arab America: A Middle School Perspective 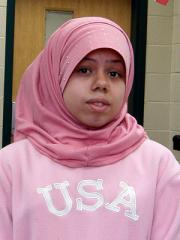 This year’s seventh graders – 12 and 13 years old – are the first Americans to grow up with no memory of time before the searing events of Sept. 11, 2001. As the country approaches the 10th anniversary of the 9/11 attacks this fall, a class of middle school journalism students from McCollough-Unis School in Dearborn invites the public to share the stories of their lives and their community by viewing an exhibition at the Arab American National Museum. Of the 29 students in the public school class, 28 are Arab American.

Look at the students’ photos or view their stories online at livingtextbook.aaja.org and it’s clear that Arab American kids are just that: Arab. American. Kids. The students’ photos and stories were created during the 2010-2011 school year, when the Asian American Journalists Association sponsored a project called The Living Textbook with a class of seventh graders at McCollough-Unis School. The idea was to help the students learn about journalism and capture stories about their Arab American community.

The students told stories about bullying and the school track team and the Detroit Tigers. They wrote and took photos about sitting down to big, American-style Thanksgiving dinners – with sides of hummus and tabouleh. Most of the kids are Muslim. Some of the girls, but not all, wear headscarves. Some wore green headscarves for St. Patrick’s Day and clipped shamrock antennae onto them. For USA Day, they wore red, white and blue.

For them, the Middle East is a local story. Most of the students’ families come from Lebanon, but the class also has students with ties to Kuwait and Syria. One boy labored over the story of the uprisings of the Arab Spring and what that is doing to his parents’ families in the Middle East. His mother stays up late at night to talk on the phone, losing sleep and weight. They live that story in their home here in the United States. One student wrote about her mother and her mother’s three sisters – all of whom moved to be close together in Dearborn with all their 18 children growing up together. “I have a cousin in every grade,” she said.

The Living Textbook is funded by the McCormick and Ford foundations with additional support from Kodak. The project, which will continue for two more years, is co-directed by two veteran journalists, Emilia Askari of the University of Michigan and Joe Grimm of Michigan State University. The Heart of Arab America exhibition was made possible by the dedication of teacher April Kincaid and the support of Dearborn Public Schools administrators.