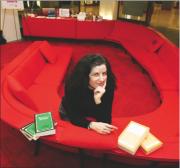 Linda Pollack studied economics at Penn State University, and art at the Vrije Akademie in The Hague and the Jan van Eyck Academy in Maastricht, the Netherlands. She spent a decade in the lowlands, eventually combining her art practice with cultural policy development while working for the European Cultural Foundation in Amsterdam. At the ECF she set up APEXchanges, a groundbreaking arts mobility fund that addressed post-cold war Europe's east / west cultural and economic divide. She also developed initiatives that promoted reconciliation and civil society in war-torn Yugoslavia, with Haris Pasovic and his Sarajevo Festival Ensemble, and Macedonian rock stars "Leb i Sol", among others. In 1996, Linda returned to the United States to pursue her MFA in New Genres at UCLA, and received her MFA from the visual arts department of UCSD. On the evening of 9/11/2001, as the Director of the Freedom to Write Committee of PEN USA, Linda was set to produce the world premier of the English translation of "Tesri Dastak" ("The Third Knock"), the debut play of renowned Pakistani playwright Shahid Nadeem, of the Ajoka Theatre in Lahore Pakistan. Nadeem, living in Los Angeles as a visiting Feuchtvanger Fellow, had written this first work about poverty and the cycle of violence which followed the 1945 partition of India and Pakistan. Faced with the horror of that day, the first impulse of the cast and the production team was to cancel the event. In the days that followed, after much deliberation and soul searching, the cast (which included acclaimed actors Shashir Kurup, Bernard White, Kal Penn, and Lina Patel, among others) made the decision to go forward with the play. A week later, an unforgettable evening of theater and discussion took place at 18th Street's Highways Performance Space. The evening reinforced Linda's conviction in exchange, art and dialogue as an antidote to fear, a way to come to terms with the complexity of the tragedy, a way to give articulation to the ineffable. In 2002, Linda created My Daily Constitution, a public work that creates new, fluid spaces where communities can come together to discuss the challenges and possibilities of our shared civic life. With MDC, Pollack proposes to go beyond the visible symbols of patriotism, beyond flags flapping on cars, and invites people to explore the less visible— yet no less important— world of civic ideals and community engagement. She has held MDC in Los Angeles, NYC, Seattle, Cincinnati, and most recently, in Indianapolis. Pollack has been awarded numerous grants, including a residency at Schloss Solitude of Stuttgart Germany, the the 18th Street Arts Center of Santa Monica California. She has exhibited and presented her work in Austria, Belgium, Croatia, Germany, Italy, the Netherlands, and the United States.