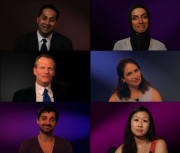 Mosque Alert tells the story of two suburban American families living in Naperville, IL -one Christian, the other Muslim- who find their lives torn apart by a proposal to build a new mosque in their community. Silk Road Rising and playwright Jamil Khoury invite you to join us on a unique journey, a first in new play development history. We want you to become co-creators of Jamil’s new play, Mosque Alert. Through your active participation we hope that you that will influence and assist Jamil as he develops a new play that will be both a work of art and a tool for civic engagement. “Rendering an issue in a work of art provides a frame so it can be seen from the perspective of someone deeply affected by it. Misunderstanding or the lack of understanding of an issue is often the result of the fact that outsiders cannot see things the way those directly impacted do. The artistic frame can highlight an issue in ways that make it memorable, raising awareness and understanding; it also provides emotional distance that can provide the possibility of more reasoned dialogue than is sometimes the case when difficult issues are being addressed.” - Doug Borwick, author of Building Communities, Not Audiences Jamil has devised an eight-step, online, interactive, new play development and civic engagement process. By turning what is typically a solitary writing project into lively virtual engagement, Jamil hopes to stimulate dialogue within and between faith communities, immigrant and non-immigrant communities, and across the political spectrum. Each step includes a comment section. This section allows you to respond to Jamil’s questions, pose your own questions or share with Jamil any thoughts you believe will enrich and inform the play. Here is your chance to co-create with a playwright, to make a lasting imprint on a work of art! Silk Road Rising’s hope is that this eight step process inspires engagement that will assist Jamil in writing Mosque Alert. Conversely, our hope is to facilitate local and national civic conversations about the rights of Muslim Americans to build houses of worship. Step 1: The Spark Watch Jamil as he discusses his inspirations and rationale for wanting to write Mosque Alert. Step 2: The Prologue Watch Jamil as he introduces the six characters he created for Mosque Alert and explores the relationships between characters. Step 3: Characters In collaboration with Jamil, the six actors playing the six characters each created four dramatized video blogs (vlogs). The vlogs are titled respectively: 1. Bio 2. On Being an American 3. Family Drama 4. Mosque Politics Each character’s four vlogs have also been assembled as one master vlog per your viewing preference. Step 4: Conflict Scenes Jamil is writing nine conflict scenes, each videotaped as a two character video blog. The conflict scenes are designed to explore tensions and conflicts between different pairings of characters in Mosque Alert. They are not scenes that will end up in the actual stage and video versions of Mosque Alert, but rather they will inform the world of the play and create context (and perhaps language) that Jamil will cull from when writing the play. Ideally, each conflict scene will also exist as a standalone work of art. Step 5: Write the Play Upon completing the nine conflict scenes, Jamil will begin the process of outlining and then writing a first draft of Mosque Alert. The draft will be workshopped with the actors, a director, and a dramaturg. Portions of the workshop will be videotaped and released online. Based on learnings and discoveries made in the workshop, as well as feedback from both the artists and the online audience, Jamil will begin revising the draft . Step 6: Staged Readings Once Jamil has the script for Mosque Alert at a place where he is happy, Silk Road Rising will produce a series of public staged readings, hopefully in different venues throughout Chicagoland. Each staged reading will be followed by a talk back session in which live audiences will be encouraged to reflect upon and discuss the piece. Portions of the staged readings and talk back sessions will be videotaped and released online for comment. Step 7: Film/Docudrama The artistic process will culminate with a full length hybrid video play/documentary film. Jamil will adapt his staged reading script for video (with revisions). The documentary component will include interviews with residents of Naperville, Illinois, both Muslim and non-Muslim, and footage of a town hall meeting that Silk Road Rising will moderate. Step 8: Write Your Review After viewing Mosque Alert video, either online or at a public screening, we invite you to share your thoughts with us, ideally in the form of an online review. We encourage you to critique Mosque Alert from any number of angles (and combinations thereof): artistic, pedagogical, civic, political, etc. We also welcome your reflections on the merits of the entire eight step journey.