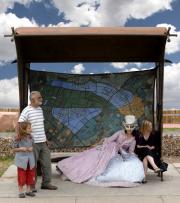 Common Ground: TOC is a partnership between Littleglobe and three rural New Mexico communities: the Eastern Agency Navajo (Diné) communities of Torreon and Ojo Encino, and the village of Cuba (TOC). The project has brought contemporary and traditional artists, community organizers, students, elders, and community members together for a multi-year creative arts project that encourages participants to explore issues of primary concern in their communities.

Phase One of a Common Ground project is four to eight months of community building and fostering a shared vision. Littleglobe selects a New Mexico community based on research, travel, and community assessment. The artists then collaborate with schools, healthcare workers, community organizers, civic leaders and others for guidance about community issues and needs, as well as community-specific design projects. They identify local artists and coordinators to serve as paid collaborators on the project, then conduct ongoing sessions with community participants who creatively explore issues of significance such as identity, family, heritage, history and community. Finally, they create and share a community “work” (installation, performance, festival, etc.) that reflects the stories, perspectives and dreams of the community ensemble.

Phase Two is 18 months or more of nurturing community capacity. The artists engage the Phase One community ensemble in the process of identifying concrete community needs with the support of partners and help the ensemble identify a community project that is of primary importance. They support a collaborative leadership team from ensemble members to develop projects through trainings in cultural leadership including dialogue, conflict resolution, program development, and coordination and fundraising. Finally, they connect Common Ground New Mexico communities for mutual support, sharing of expertise and intercommunity projects, and integrate participants as Littleglobe interns and artists.

In 2007, Littleglobe launched its first Common Ground project in rural New Mexico, commissioned by the NM Arts and Social Justice Committee and in partnership with The Lensic Performing Arts Center and The Southwest Organizing Project. The partners chose to base their first rural collaboration in the small town of Cuba and the two eastern Diné (Navajo) villages of Ojo Encino and Torreon. Littleglobe characterizes these interrelated communities as “deeply affected by racism, poverty, and homelessness.” The artists state: “The struggle to survive reinforces differences between these communities, and yet they share a basic desire for connection and growth.”

The TOC (Torreon, Ojo Encino, Cuba) Project brought together 150 community members and provided them with creative tools to express issues of significance and meaning in their lives. They conducted weekly workshops in three schools over five months and also conducted weekly Saturday sessions with an intergenerational ensemble, ages 6 to 87, working with film, music, visual arts, poetry and the sharing of food. The ensemble comprised Diné, Anglo, African-American, Hispanic, and Chicano participants. For the artists, it meant getting people to cross community borders. “Several people from Cuba feel Torreon [a reservation] is ‘unsafe for non-Natives,’” says Littleglobe’s Molly Sturges. “We purposely scheduled our weekly workshops in both communities.” They decided to offer people rides to the workshops. “Many people now cross these lines every weekend.” Says one participant in the TOC documentary film:

Collectively, the ensemble decided to present the First Common Ground Festival at the Sandoval County Fairgrounds in Cuba in June 2008. The festival of stories about place and people included their artworks about the daily lives, identities, and history of community members. Later, members of the TOC group performed with Littleglobe artists for an audience of 300 at the Lensic Center in Santa Fe, including elements from the Common Ground Project.

Following the festival, a group of committed participants formed the TOC Regional Community Council and secured initial funding from The McCune Charitable Trust for training in collaborative leadership, conflict engagement, and community development. In 2010, the council hired Littleglobe to come to its community as teaching artists to help with a summer intensive. Littleglobe is now in an advocacy role to help the council secure two years of full-time salary so one of the leaders can develop programming that would lead to a vital family and youth community center based around arts programming. As Terri Winters, one of the council members says, "I want to create the kind of environment that I would feel safe in. Kids here don't have anything to do but so much to offer."

The TOC Regional Community Council is working with Cuba Regional Economic Development Corporation under the fiscal sponsorship of VOCES, Inc. in Albuquerque. They are also working with Henry Rael of Connecting Community Voices and have strong relationships and partnerships in their home community with schools, churches and the Ojo Encino chapter house.