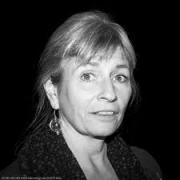 Nora Ligorano and Marshall Reese have collaborated together as Ligorano/Reese since the early 80s. They use collaboration to blend diverse talents into a singular voice and vision. In the process of creating their work, their individual contributions cross and criss-cross from brainstorming to realizing and making the art on location or in the studio.

They use unusual materials and industrial processes to make their limited edition multiples, videos, sculptures and installations, moving easily from dish towels, underwear, and snow globes, to electronic art and computer controlled interactive installations. They take and manipulate images, audio and text from old media: print, television, radio and combine that with the new: internet and mobile telecommunications. Their pursuit is an ongoing investigation into the impact of technology on culture and the associations and meanings that the media brings to images, language and speech in politics.

They have an interest with using open forms to involve community interaction. Their ice sculptures, Main Street Meltdown and The State of Things share that same sense of open possibility, fusing natural processes of erosion and decay as flexible durations and markers to determine the experience of the work. In June 2011 during the budget debate they installed Morning in America an ice sculpture of the word "Middle Class" in the garden of Jim Kempner Fine Art in NYC. The timelapse video using an excerpt of Senator Bernie Sanders' fillibuster against the extension of the Bush tax cuts went viral.

Many of their sculptures and installations reinterpret and reexamine older forms of technology - using objects that signify truth, authority and manifest cultural historicity. Ligorano/Reese use mirrors, clocks, metronomes and medieval codex bindings and combine them with video screens. They have invented micro-projection systems to display films on the head of a pin or the counterweight of a metronome.

Since 2004, they've investigated portraiture as a construct of social representation. Line Up (2004-5), their series of portraits of Bush administration officials in mug shot, acknowledges that the mug shot is the preeminent form of portraiture now that more people are incarcerated in the U.S. than any other country in the world. In December, 2007, the exhibition of these photos at the New York Public Library caused a firestorm of controversy with heavy rotation on FoxNews, DrudgeReports homepage and many, many other publications. In 2001, they launched www.pureproductsusa.com, the online retail website for their infamous political art series the Pure Products of America. Since 1992, Ligorano/Reese have made 11 multiples in signed editions of 3 to 100. They are best selling editions at Printed Matter, artbook@ps1 and the New Museum store and have prompted, at least on one occasion, the RNC to threaten them with copyright infringement.