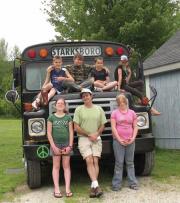 After graduating from the Swain School of Design with a BFA in Graphic Design, Matthew established his own graphic design and illustration studio. In 1989, Matthew created his own cartoon strip, "Cyrus and Ida", which appears weekly in the Vermont News Guide and is now a monthly addition to the Starksboro Gazette. His paintings and sculptures are inspired by his surroundings whether in Vermont or through his travels in Europe, Brazil and Central America where he has also exhibited in group and solo shows.

In 1992, Matthew co-founded the Vermont Arts Exchange (VAE). As VAE Artistic Director, Matthew oversees VAE's year-round arts outreach programs, exhibitions at the Stark Hose Firehouse Gallery and the Mill Gallery, and performances such as the Basement Music Series. Matthew has also taken part in numerous school and community arts residences throughout the Northeast and in England working with youth-at-risk, the elderly, local schools and the general community. He has facilitated several mentoring and training programs for artists and presented at many conferences on community arts and integrating arts into health care settings.

Matthew's vision for his artist-in-residency is to make art with community members that bridges and builds on existing community connections, traditions and treasures.