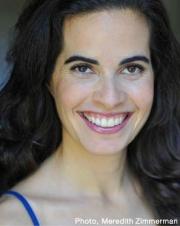 Leila Buck is an Arab American playwright, actress, storyteller and teaching artist. Her award-winning solo show, ISite, about growing up between the U.S. and the Arab world, has toured the U.S., Europe and China. Her second play, In the Crossing, about her experience in Lebanon with her Jewish husband during the Israeli-Hezbollah war of 2006, and the challenges of telling that story, was first performed in the Public Theater's New Work Now! Festival 2006 (Director Jo Bonney), and has since been developed with the support of the Brooklyn Museum, Epic Theatre Center, the Public Theater and New York Theatre Workshop, and the Lark Play Development Center, where it was a finalist for Playwrights' Week 2009.

In November 2008 she performed her monologue One, about an Arab-American canvassing for Obama, for Epic's First Vote event, alongside work by renowned writers and performers including Neil LaBute, Craig Lucas, Kathleen Chalfant, David Strathairn, Nilajah Sun and Tony Kushner. Her most recent work in development, Hkeelee, begun in 2008, received a Special Jury Prize from the Middle East America grant co-sponsored by Silk Road (Chicago), the Lark (New York), and Golden Thread Productions (San Francisco).

Over the past ten years Buck has been a founding member and Education Director of Nibras Arab-American Theater Collective, Artistic Director of Nisaa Arab-American Women's Collective, and a writer and performer for the New York Arab-American Comedy Festival. Buck has conducted workshops on playwriting, storytelling and drama for cross-cultural engagement at conferences, universities, schools and cultural centers across the U.S. and around the world, most recently in Denmark as a U.S. State Department Cultural Envoy.

About her work, Buck writes: In my writing, performance, and teaching, I often serve as a bridge - facilitating direct and nuanced connections that cross political, social, economic, national, religious and cultural boundaries. I grew up with my Lebanese mother and American diplomat father, constantly moving between the U.S. and the Arab world. In the process, I experienced firsthand how multiple cultures, lives and daily realities exist simultaneously - equally real, sometimes in conflict, often intersecting. So I strive in all of my work to reflect both the uniqueness of our different experiences and the unexpected links between them.

I seek always to create a shared space of intimacy, inviting everyone present to connect to the work and one another at the intersection of the personal and political, where our beliefs about the world and our relation to it are formed. Over the years I have seen how this process can transform the energy in the room, create challenging dialogue, and shift perceptions. I strive through these moments of connection in my work to inspire compassion, empathy and action across all boundaries towards meaningful change in ourselves, and in our local and global communities.