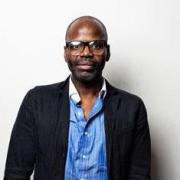 As a creative practitioner, curator and consultant, i develop projects focused on the intersections of civic, social and live art. i've been working within the live arts scene nationally and internationally  for the past two decades and founded D  UNDERBELLY in 1997 as a network to support artists of color and facilitate creative projects centered on cratfing consciousness surrounding people of color.  Since founding D UNDERBELLY, i've expanded the creative work to included disability culture, queerness, the body as archive and trangressive art that defies categorization. All deeply seeking to authentically engage commmunity in meaningful exchange.

Select recent creative endeavors include:  “Just Not the Face” - a solo meditation on the killing of a young black man named Trayvon Martin -  at School of the Art Institute Chicago in association with Insight Arts; "tabula rasa...or this is how it flows", a solo work commissioned for Bodies of Work Festival of Disability Arts and Culture; "start a movement...end a movement", a commissioned performance work for the exhibit Unfurling: 5 Explorations in Art, Activism and Archiving at Gray Center for Arts & Inquiry; and “counterpoint”, a moving exploration of resistance as a physical force,  for Block Museum’s  An Artist Congress.  Internationally, i contributed to the development of #IamCHAIR movement for  2014 Hemispheric Institute’s Encuentro in Montreal; staging interventions and actions across the city in support of recognizing the accessibility issues for those living with a physical disability.

​Aligned with the creative work, my cultural work extends into facilitation of conversations and community organizing that inspire a deepened awareness of diversity, nuances of heritage and interculturalness. i piloted and curated a humanities discussion series entitled Moving Dialogs that occurred throughout the city of Chicago from 2012-14. Because of my process of listening and supporting varied neighborhood faciltation of the cultrual plan, i was appointed to the Cultural Advisory Council for The City of Chicago's Department of Cultural Affairs & Special Events.