We the People: A Giant Screen Film & a Nation of Ideas Social Learning Environment Project 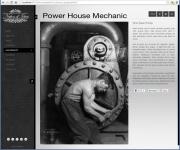 Development is in progress for a supporting interactive civics education and engagement website, "Nation of Ideas.Org", with the donation of 1.7 million dollars of scholarly and artistic images and media content from the film. The project is in post production stage with intent of national release to institutional theaters (non-profit) across America in the fall of 2013.