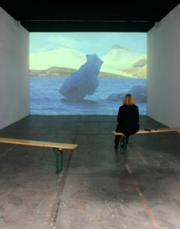 Anthem (simulation of the installation speeded up - no sound)