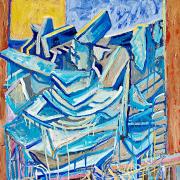 Tony Khawam, an American was born in Aleppo, Syria. He now lives and works in Florida and New Jersey. His most recent work was influenced by the complex social and cultural differences, which impact ordinary people in urban settings. His recent work is premised on the idea that challenges our vision of Syria’s urban scenes in its war-torn cities and structured through our own varying positions. His use of expressive brush strokes weaves together images of geometric and organic shapes. Some are abstract and others are recognized objects scattered across the canvas in a chaotic setting. The result resembles a blast that reveals remnants in the aftermath of an explosion which intensify our experience.

Mr. Khawam’s primary focus is of his birthplace – the city of Aleppo with urban scenes of collapsed apartment floors, fallen balconies, curved rooftops, debris and punched holes in building facades. The painting series reveal haunting and disturbing scenes and intentionally was painted with a palette of joyful color fields and shapes that emerge from the canvas with a vigorous life-force. A fantastical place of fear, desire, refuge, conquest and decay, the Syrian conflict has played an increasingly important role in creating a subject matter with a unique style that connect people through art. His interest in portraying the socio-political issues of the multi-cultural and social disturbances is well presented and has an aesthetic sense of the sublime.

Mr. Khawam’s sculpture of “Urbanism” in his Cascading Facades series are purely abstract shapes that intuitively generate a structural relationship of light and space. The sculpture works with entangled architectural materials and ordinary modern household objects and shapes which strongly suggest the human figure. The structure of the sculpture is based on repeated geometric shapes in different sizes, juxtaposed and tumbling towards the base. The sculptures are inspired by bare building frameworks of skeleton-like apartment buildings, a depiction of the falling facades, windows, doors, balconies, railings and debris that make it almost intact despite the collapsed structures.