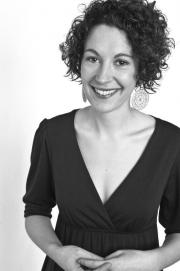 Rachel Grossman is a performing artist, administrator, and producer with thirteen years of non-profit arts, education, and community program management in the Washington, DC area. She is a co-founder of dog & pony dc (an ensemble-based devised theatre company in DC) and serves as the company's Ring Leader for Organizational Advancement. With dog & pony dc, Rachel produced PUNCH!--that's the way we do it, directed COURAGE and Beertown, and performed in Cymbeline, Bare Breasted Women Sword Fighting, Separated at Birth, and Beertown. Rachel is currently the Managing Director at Washington Improv Theater. She spent two years at Woolly Mammoth Theatre Company launching their “connectivity” innovation and serving as the company’s first Connectivity Director. Connectivity primarily focuses on the engagement and investment of the audience community at a theatre; a passion, and even slight obsession, for Rachel. She spent four seasons as the Director of Education & Outreach at Round House Theatre and prior to that she managed programming in the education and community programs departments at the Shakespeare Theatre Company, Arena Stage, and CENTERSTAGE (Baltimore, MD). She was an Associate Producer for the 2010 Source Festival, focusing on Literary Management and Casting, and also spent a few years producing with eXtreme eXchange. Rachel is a former member of Referendum: Political Arts Collective, performed with DC Playback Theatre, and adjudicated with the Helen Hayes Awards. A firm supporter of health and safety in the workplace and community, she has been an American Red Cross instructor since 2001. Rachel is serving on the Interactivity Foundation’s Arts & Society panel, exploring the arts and public policy. Rachel was one of fifty theatre professionals selected to be part of Theatre Communications Group’s 50th Anniversary campaign I AM THEATRE. Her video launched the campaign in June 2011. Rachel is a proud resident of the District of Columbia, having been taxed without representation since 1999. She resides in Petworth with her husband Colin K, Bills and their spirited dog, Adler.