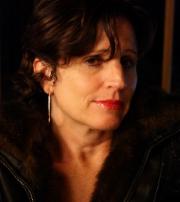 Leslie Schwartz is the author of two literary novels, Jumping the Green (Simon & Schuster, 1999) and Angels Crest (Doubleday, 2004.) Jumping the Green won the James Jones Literary Society Award for Best First Novel and was published in three languages. Angels Crest was a Book Sense 76 pick and was published in nine languages. The film version of the book wrapped principal photography in December, 2009. The film title is Waska. In 2004 Schwartz was named Kalliope Magazine's Woman Writer of the Year. In addition to her novels, Schwartz has published short stories, articles, essays and book reviews in various newspapers, glossy magazines and literary journals. Some of these venues include Poets & Writers, Teachers & Writers, Los Angeles Times and Sonora Review. For the last ten years, she has taught creative writing at UCLA Extension, the University of Iowa Summer Writers Festival and at prisons, low-income public high schools and gang intervention agencies. Her latest stint, teaching creative writing at the nation's largest gang intervention agency, Homeboy Industries, resulted in the creation of a literary magazine called the Homeboy Review. The magazine was created to bridge the gap between mainstream, established writers and those who write from the margins and to create a broad community of literature for all audiences.