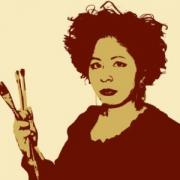 Favianna Rodriguez is a celebrated printmaker and digital artist based in Oakland, California. Using high-contrast colors and vivid figures, her composites reflect literal and imaginative migration, global community, and interdependence. Whether her subjects are immigrant day laborers in the U.S., mothers of disappeared women in Juárez, Mexico, or her own abstract self portraits, Rodriguez brings new audiences into the art world by refocusing the cultural lens. Through her work we witness the changing U.S. metropolis and a new diaspora in the arts.

Hailed as "visionary" and "ubiquitous," Rodriguez is renown for her vibrant posters dealing with issues such as war, immigration, globalization, and social movements. By creating lasting popular symbols - where each work is the multiplicand and its location the multiplier - her work interposes private and public space, as the art viewer becomes the participant carrying art beyond the borders of the museum.

Rodriguez has lectured widely on the use of art in civic engagement and the work of artists who, like herself, are bridging the community and museum, the local and international. Rodriguez's has worked closely with artists in Mexico, Europe, and Japan, and her works appear in collections at Bellas Artes (Mexico City), The Glasgow Print Studio (Glasgow, Scotland), and Los Angeles County Museum of Art (Los Angeles).

As a teacher, Rodriguez has conducted workshops and presentations at Loyola Marymount University (Los Angeles), El Faro de Oriente (Mexico), de Young Museum (San Francisco), the Habana Hip Hop Festival (Habana, Cuba), as well as Williams College and The Commonwealth Club. In 2003, she co-founded the Taller Tupac Amaru printing studio to foster resurgence in the screenprinting medium. She is co-founder of the EastSide Arts Alliance (ESAA) and Visual Element, both programs dedicated to training young artists in the tradition of muralism. She is additionally co-founder and president of Tumis Inc., a bilingual design studio helping to integrate art with emerging technologies.

Rodriguez is co-editor of Reproduce and Revolt! with internationally renowned stencil artist and art critic Josh MacPhee (Soft Skull Press, 2008). An unprecedented contribution to the Creative Commons, the 200-page book contains more than 600 bold, high-quality black and white illustrations for royalty-free creative use. Her artwork also appears in The Design of Dissent (Rockport Publishers, 2006), Peace Signs: The Anti-War Movement Illustrated (Edition Olms, 2004), and The Triumph of Our Communities: Four Decades of Mexican Art (Bilingual Review Press, 2005).